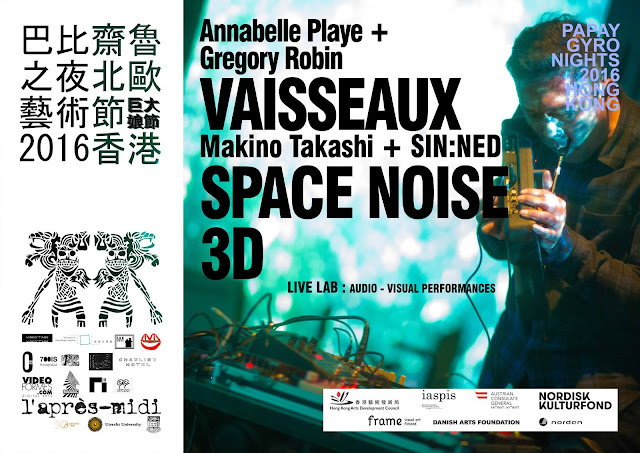 ANNABELLE PLAYE
Annabelle Playe : A multidisciplinary artist, she explores voices, sound, video, and writing depending on her projects. She performs a contemporary vocal repertoire in different shows from the Glossophonies company. She has appeared in the creations by Jacques Diennet as a singer and reader. She has worked with the poet Christian Tarting and the choreographers N+N Corsino. Through her projects, she has met Gérard Siracusa, Richard Dubelski, Jean-Marc Montera, Marc Siffert, Franck Vigroux, Michel Blanc.
She is the author of two monologues: “Ligne” (Line) and Mater that have been published by Alna Editeur. “Mater” was commissioned by Isabelle Krauss (Compagnie Actuel Theatre that was created in 2013.)
She created the AnA company whose remarkable projects mix theatrical and poetic writing, music, and experimental videos. She has created and performed “Ligne” (Line), a performance for which she composed the electroacoustic music, staged by Ludovic Longelin. She has done readings of her text “Des pas dans la guerre” (Steps in war) during the Un Automne à Tisser festival at the Cartoucherie de Vincennes, at the Mauvaise Tête theater in Marvejols, as well as at the Bruits Blancs festival (Anis Gras – Arcueil). Her album “Matrice” (Label DAC) has been played by many international radios and on Radio France. Matrice has become a multimedia performance with Philippe Fontes, a video performer. The duo has performed in France and internationally. Her next album, “Vaisseaux” (Vessels) will be released in early 2015.
She composed and performed the music of “La poupée noire” (The black doll), staged by Jean-Marc Bourg, and based on the poetry by Alejandra Pizarnik.
She created “ANA”, an audiovisual solo, from images by the director Gregory Robin. She sings in “Le miroir des ondes” (The mirror of waves), an album by the percussionist Michel Blanc and the guitarist Marc Ducret (will be released in 2015).


GREGORY ROBIN
Gregory Robin : Musician, then photographer, Gregory Robin moved towards directing in 2003. He has devoted himself totally to directing since 2006.
Gregory Robin has been involved in the painting world since childhood, and he developed and demonstrated a visual awareness very early. He prefers the camera to brushes. His first shots already showed a very personal esthetic, playing with the grain and blurring. This visual research guided him to other media like the Super 8 with which he started out as a director. Although his filmography is mainly made up of documentary creations, his interest in dealing with genres drove him to explore their interdisciplinarity, imparting a style to reality, which sometimes ends up close to fiction. He has come back to the experimental form in his film Entrailles, filmed at the mining museum in Saint-Etienne. His future projects demonstrate this orientation.
In 2012, he and Joël Caron created Après la Guerre Films (After the War Films), an organization that makes creation films. In 2014, he partnered with Jean-Philippe Raymond and Julien Féret to create the production company Far Center Films.


MAKINO TAKASHI
Makino Takashi born in Tokyo in 1978. Makino began making films in 1997. In 2001, after graduating from the Cinema Department of Nihon University College of Art, where he majored in Cinematography, he went to London alone to study under the Quay Brothers. He mainly studied film music and lighting. Makino continued to make films after returning to Japan and has held solo screenings regularly since 2004. He met Jim OfRourke in 2005, which accelerated his film making pace. His film, No is E won the Terayama Shuji Prize at the Image Forum Festival 2007. Makino was prominently featured at the International Film Festival Rotterdam 2008, where Elements of Nothing was nominated for the Tiger Award. Since then, as Japanfs leading experimental film artist, his films have been invited for screenings at more than 30 international film festivals and video art festivals. His installation using 35mm film and HD was exhibited at the Tokyo Metropolitan Museum of Photography. In 2009, still in cosmos won the Grand-Prix at the 25FPS International Experimental Film & Video Festival 2009. His first medium-length film, The World, was premiered at a late show at the Kichijoji Baus Theatre in Tokyo, marking the new dawn of experimental films.


SIN:NED
Sin:Ned, aka Dennis WONG / WONG Chung Fai, is an improviser, experimentalist and noise addict from Hong Kong. He regards himself as a medium and his works, only manifestation of our hidden sonic aspects. His practice on noise and sound signifies an implicit form of mysticism in search of direct and pure physical experience through chaos, errors and the extremes. As an instrumentalist, he struggles to defy all rational and orthodox structures by pursuing a seemingly meaningless, aimless and purpose-less sonic existence. His works involve a wide range of tools and materials such as Chapman Stick, guitar, laptop, hardware synths, circuit bent instruments, feedback, field recordings and various unusual non-musical objects and devices. He is the co-founder of Re-Records (www.re-records.com), Twenty Alpha, SECOND, advisor of soundpocket (www.soundpocket.org.hk), and the Hong Kong producer of JOLT Festival (http://joltarts.org/home). In addition to being founding member of experimental outfits No One Pulse, After Doom, adeo and underture, he is also the ritualist behind home brew events such as Kill The Silence Festival, Keep The Silence Festival, Subliminal Lounge, ACO Sound-on-Site, and live performance series NOISE to SIGNAL.
Being a veteran writer of the legendary Hong Kong alternative music magazine MCB (Music Colony Bi-Weekly), his writings had influenced a wide spectrum of experimental musicians and listeners in Hong Kong and China. As a sound improviser, he has offered performance and creative work for concert, sound installation, workshop, audio-visual and theatrical performance such as Get It Louder (2007), Hong Kong & Shenzhen Biennale of Urbanism\Architecture (2007, 2009), Architecture is Art Festival (2009), Notch Festival 2009 Guangzhou Station (2009), Against 2012: Fukuoka Extreme Music Festival (2012), New Vision Arts Festival (2012), Miji Festival (2013), Kill The Silence Festival (2013, 2014 & 2015), Freespace Festival (2013), Lacking Sound Festival (2014), Lausanne Underground Film & Music Festival (2015), JOLT Touring Festival (2015)…etc.
He has worked with artists such as Zbigniew Karkowski, Otomo Yoshihide, Kazuhisa Uchihashi, Alfred 23 Harth, Yan Jun, Torturing Nurse, dj sniff, and Dickson Dee…etc. His works have been featured in the infamous Belgium imprint Sub Rosa’s “An Anthology of Chinese Electronic Music”and “An Anthology of Noise & Electronic Music Vol. 7”.