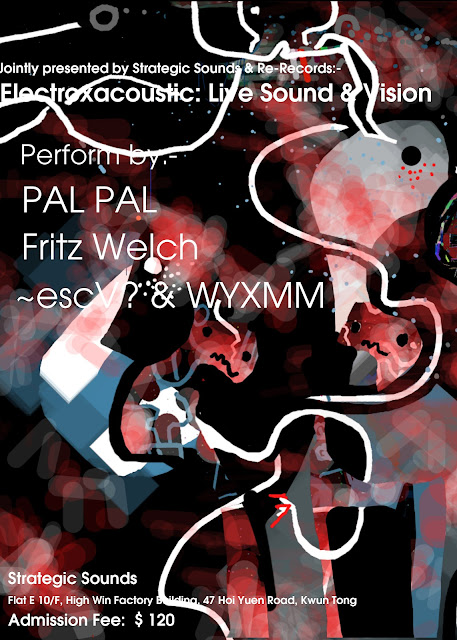 Across this sound and live drawing performance, WYXMM (sound artist) and ~1escV? (sound and visual artist) would like to mix their both creative universes in order to compose a kind of sensitive travel to the audience.

Using soundscape, electronic melodies and colorful lines, they would like to invite the viewers to construct their own narrative experience according to present imaginary tales and personal past history.

Fritz Welch is a drummer, percussionist and vocalist with a shadow practice in visual endurance investigation. He is determined to stretch the escalator of possibilities into the bloodshot eye of results. He currently plays with FvRTvR (a duo with Guido Henneböhl), With Lumps (a duo with Neil Davidson) and the post-conceptual anti-band Asparagus Piss Raindrop. He was a member of the now defunct and perpetually grim Peeesseye. Welch has played in various improvising contexts with Tamio Shiraishi, Tony Conrad, Maya Dunietz, Dylan Nyoukis, Michael Vorfeld, John Butcher and many others. A longtime Brooklynite of Texas origins, he is now pleased to be based in Glasgow.

Back from Montreal PAL PAL is a sound artist and experimental musician. He collaborates with artists from various disciplines in projects involving theatre, dance, poem, sound installation, soundtrack for video and fashion event besides DJing and organizing music events and workshops. Taking part in bands like Milkteeth, The Sinister Left, Tree Phoning...etc, he performs with acoustic/electronic instruments not limiting to vintage synth, sampler and effects. His mission with [Feel Music Experimental Lab] is to promote and spread sound art, experimental and improvised music to wide open Hong Kong’s music scene, build up unique music style and find new music directions and ideas. Being as a music consultant he has been picking and mixing the best tunes for prestigious restaurants and fashion stores including Lane Crawford.

Wilson first learned classical music from his mother. Other influence started with early 80's pop sound including rock, electronic and Jazz. Later he was exposed to the more alternative world of music (including John Zorn, Tom Waits as well as the disbanded local group The Box). For the last decade he explored music for various media such as dance, theatre, video art, animation and film. Between 2003 and 2009, he had released a total of 3 full length albums: STUCK IN TRAFFIC (2003); LITTLE COLD RED (2005); and WHALE SONG (2009). Recently he started focusing more on the minimalistic yet narrative roles of sound

Enrica started to pursue her artistic endeavors after graduating from the Hong Kong Polytechnic University in 2004 with a BSc (Hons) in Construction Economic and Management. In 2008, she was invited by the Hong Kong Federation of Youth Groups to participate in the “You Are What You Wear” project, of which her designed products were sold in the Hong Kong Book Fair 2008. She studied photography, video and new media art at the University of Illinois in Chicago in 2010 and attained her second bachelor degree of BA (Hons) in Creative Media at City University of Hong Kong in 2011. Her art connects with the viewers and the society and combines science and art, sense and sensibility. Her work Le Montage de l'émotion was exhibited in “8+3 Art Exhibition” in K11, Hong Kong and The Solitude of Jing Hua was included in exhibition section “Narcissism, Voyeurism and The Body” in Jakarta Biennale 2011.