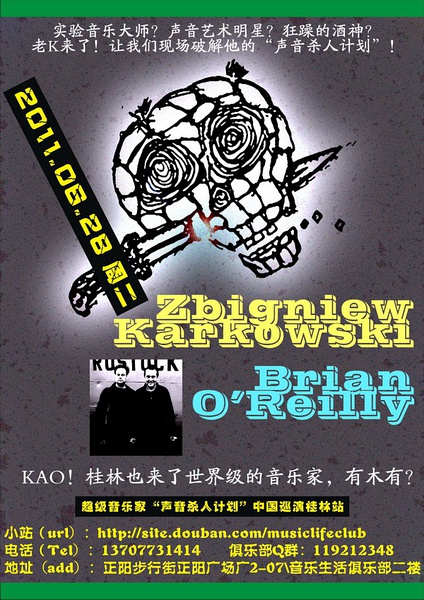 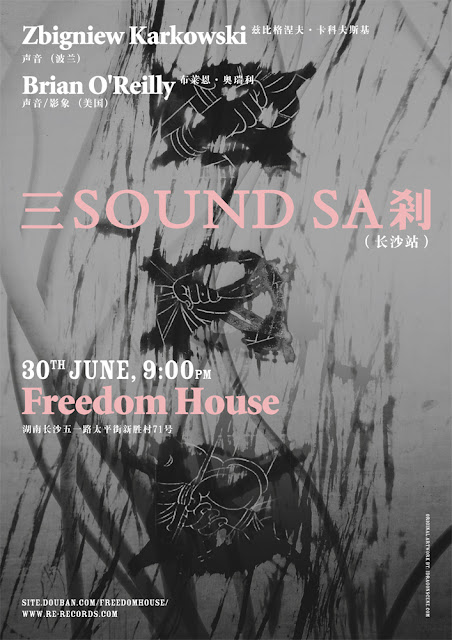 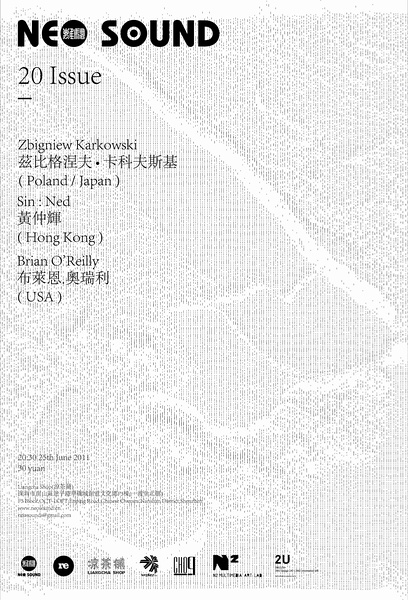 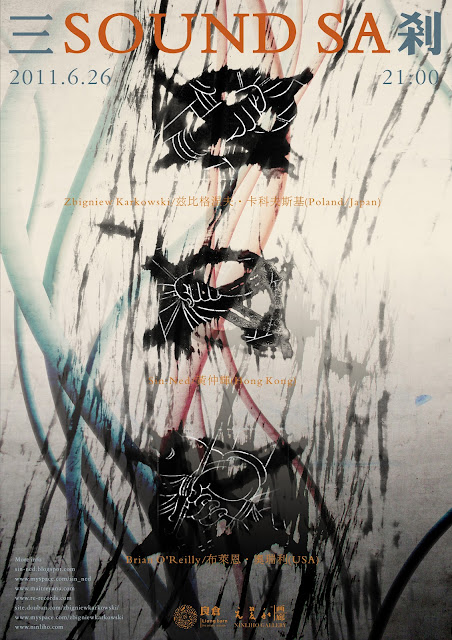 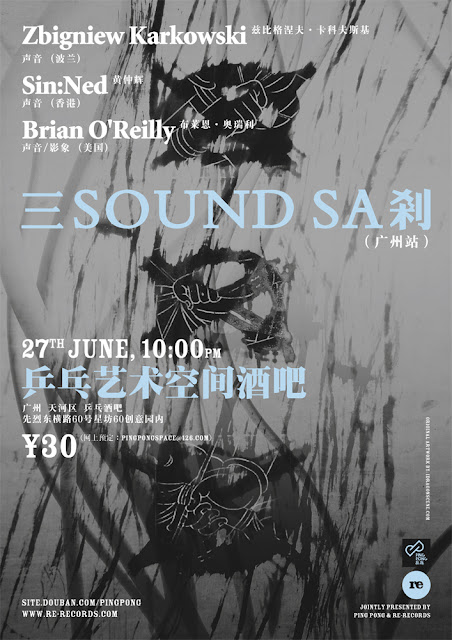 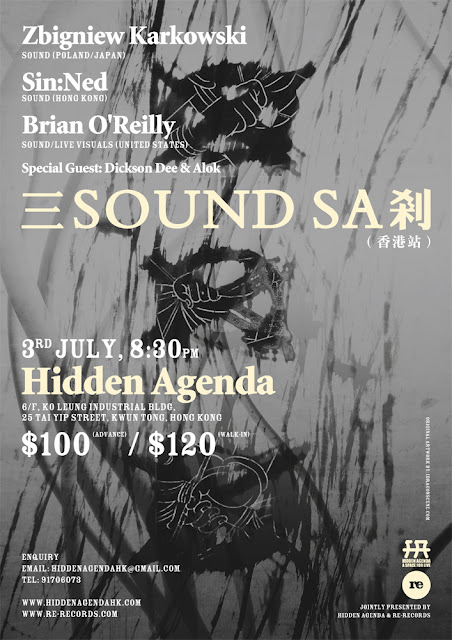 Zbigniew Karkowski, Brian O’Reilly & Sin:Ned, 3 highly acclaimed experimental sound artists from Poland, America and Hong Kong, join force for the first time in this south China tour. Integrating live visuals with 3 solo and 3 duet improvisations to create the SOUND SA, a converging vortex of the 3 lethal forces, at which lies a new vision that transcends music, theory and structure: an audio / visual rhetoric that embraces chaos and extends our perceptual limitation to the unknown territory. 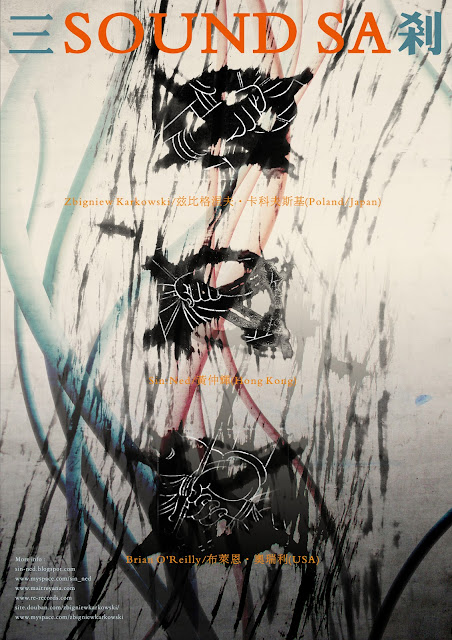 Zbigniew Karkowski
Zbigniew Karkowski was born in 1958 in Krakow, Poland. He studied composition at the State College of Music in Gothenburg, Sweden, aesthetics of modern music at the University of Gothenburg's Department of Musicology, and computer music at the Chalmers University of Technology. After completing his studies in Sweden, he studied sonology for a year at the Royal Conservatory of Music in Den Haag, Netherlands. During his education, he also attended many summer composition master courses arranged by Centre Acanthes in Avignon and Aix-en-Provence, France, studying with Iannis Xenakis, Olivier Messiaen, Pierre Boulez, and Georges Aperghis, among others. He works actively as a composer of both acoustic and electroacoustic music. He has written pieces for large orchestra (commissioned and performed by the Gothenburg Symphony Orchestra), plus an opera and several chamber music pieces that were performed by professional ensembles in Sweden, Poland, and Germany. He is a founding member of the electroacoustic music performance trio "Sensorband." Since 1995 he is based in Tokyo, Japan where he collaborates closely with japanese avantgarde scene. He has extensively toured in Europe, Asia, North America, South America and Australia and his music has been performed at several festivals

He has as well written music for film, video, theatre and dance. His scores are published and distributed by STIM in Sweden and until today he has released more than 100 cds by labels all over the World. He is convinced that it is a responsibility of an artist in the present day to travel and work around the World in order to learn and understand different cultures and traditions and discover truth about ourselves and our planet. He also strongly believes that geographical, political and social exile is a necessary condition for true and honest creation. He is not interested in the traditional definition of music, in his opinion, all musical theory and systems as cultural concepts must be destroyed. In his latest work, his main concern is to realize drama with sound - electronic and acoustic walls with the architectures of ruins transcribed in the scores.

Brian O’Reilly
Brian O’Reilly works within the fields of electro-acoustic composition, moving images and noise music. Also he is a contrabassist focusing on uncovering the inaudible textures and hidden acoustic microsounds of his instrument through the integration of electronic treatments and extended playing techniques. He attended the School of the Art Institute of Chicago on a scholarship for sculpture during which time he perused independent studies in improvisation and composition with members of Chicago’s AACM. After which he relocated to Paris to research the composition methods of the composer Iannis Xenakis, receiving a appointment as Musical Assistant at Xenakis’ studio. He pursued graduate studies in Electronic Music at the University of California Santa Barbara’s Media Arts and Technology program, where his collaborations with Curtis Roads began with the project “Point Line Cloud” which won an Award of Distinction at Ars Electronica in 2002. As Operations Manager of Recombinant Media Labs in San Francisco He worked on many project for the Asphodel record label & recording studio, and has received several international residencies/commissions including invitations to work as a guest artist at the Zentrum für Kunst und Medientechnologie (ZKM) in Germany, the SH Festival in Shanghai and All Tomorrow Parties festival curated by Autechre in the UK. He has worked on projects with Eliane Radigue, Luc Ferrari, Curtis Roads, Zbigniew Karkowski, Otomo Yoshihide, Matmos, Maryanne Amacher, Zeitkratzer, Christian Marclay, William Basinski, Fe-Mail, Yasunao Tone, Francisco López, Garth Knox, Steina and Woody Vasulka, amongst others. Currently He is performing audio and visuals solo and in the groups Iron Egg & Black Zenith, and is a lecturer at LASALLE’s School of Contemporary Music.

He has offered performance and creative work for concert, sound installation, workshop, audio-visual and theatrical performance. He had taken part and performed in various art events such as HK Sound and Vision Festival (2003), Get It Louder (2007), Hong Kong & Shenzhen Biennale of Urbanism/Architecture (2007, 2009), Architecture is Art Festival (2009), Notch Festival 2009 Guangzhou Station (2009).

Artwork design by idragonscene.com
Posted by Sin:Ned at 12:35 AM No comments: