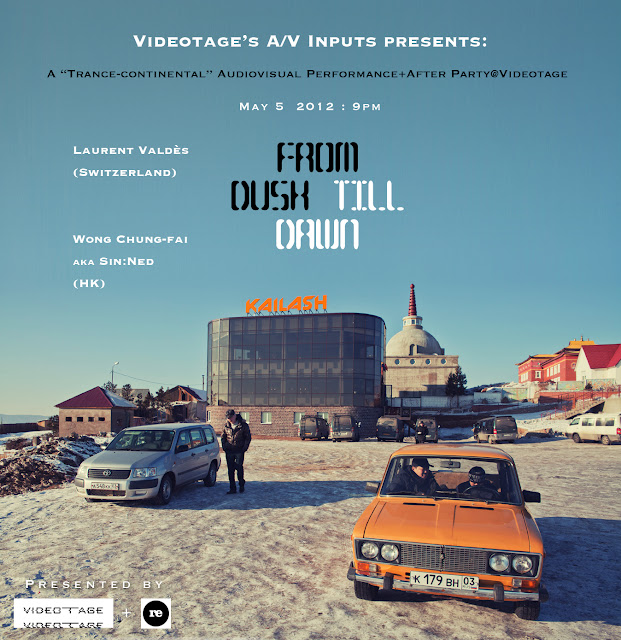 On May 5 we welcome Swiss video-artist and performer Laurent Valdès collaborating with Hong Kong’s own electronic music expert Wong Chung-fai, for an audio/visual event you won’t want to miss!

The night begins at 9 p.m. with drinks, snacks, and some light music. At 10 p.m. Valdès will present a stunning visual diary of his five week transcontinental journey by train from Lisbon to Hong Kong, accompanied by live music from the keen-minded idiosyncratic improviser Sin:Ned, for an unforgettable viewing experience. “From Dusk Till Dawn” will be followed by a party starting at 11 p.m.
about Artists:


Laurent Valdès:
Video-artist and performer from Geneva, Switzerland, Laurent Valdès first studied cinema. Due to people met on his way and artistic experimentations, he finally never worked in the film industry. After his bachelor, he got naturally involved in the art performance scene, designing video installation for stage performances (theater or dance), as well as stage design and light design. It made his own artistic work evolve in between the field of video art and performing art. He collaborated also with musicians from contemporary music to experimental music and also electronic music. Since 1998, year of it’s first visit to Hong Kong, he came back several times to film and photograph different aspects of the city. This made him a particular witness of the city transformation.

Wong Chung-fai 黄仲辉:
Wong Chung-fai aka Sin:Ned, an experimentalist musician and free-lance writer from Hong Kong. He’s also co-founder of the experimental sound blog Re-Records.com, member of the electro-acoustic duo No One Pulse, and a veteran writer of the legendary Hong Kong alternative music magazine MCB (Music Colony Bi-Weekly). His writings have influenced a wide spectrum of experimental musicians and listeners in Hong Kong and China. He spends much of his time sculpting sonic materials with his laptop and various non-standard electronic gears. With his embracement of improvisation, noise, errors, chaos and randomness, he re-envisions an unorthodox sound-making process driven by intuition, bodily expression and direct experience.

He has provided creative work for concerts, sound installations, workshops, audio-visual and theatrical performances. He has performed in various events in HK and mainland China, such as Hong Kong & Shenzhen Biennale of Urbanism/Architecture (2007, 2009) and Notch Festival 2009 Guangzhou Station (2009). He has collaborated and performed with local and international artists.
Presented by
Videotage + Re-Records
Posted by Sin:Ned at 10:16 PM No comments:

On the Way - Visual Talking 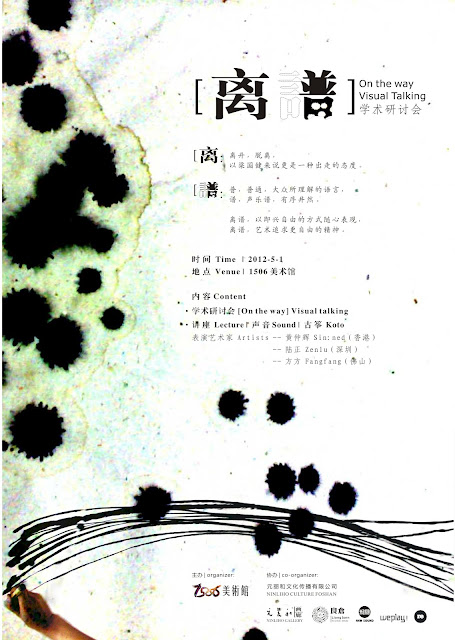 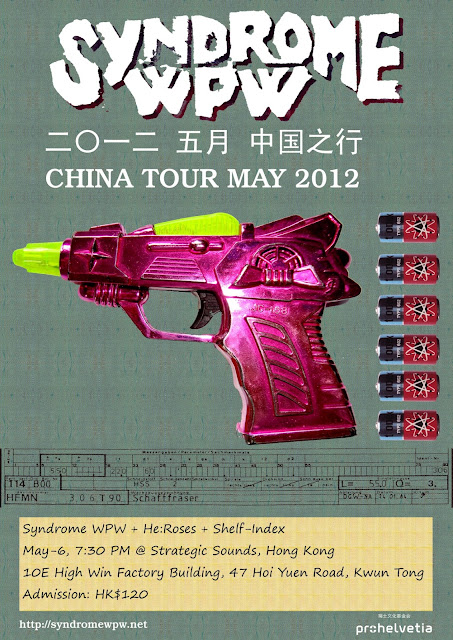 The hardcore spirit of Punk Rock in an Electro outfit!! Destructive introvert, urban epileptic, Syndrome WPW's electronic laptop-less show includes tragedy, neurosis and bullets. Far removed from traditional laptop electro live performances, and more akin to the tradition... of Punk and Heavy Metal, his show looks like nothing else. The audience gets punched in the face, and at the end of the performance the stage is nothing but a heap of ruins.

Syndrome WPW
www.syndromewpw.net
Syndrome WPW comes from Lausanne, Switzerland, and has been performing since 2004 in Switzerland, France, Japan, USA, Canada, The Netherlands, Belgium, and Germany. He shared the stage with musicians such as dDamage, Dat Politics, Patric Catani, Kap Bambino, Aavikko, Bodenstandig 2000, Otto Von Schirach, Keiji Haino, in places such as the Lausanne Underground Film and music Festival (LUFF), Super-Deluxe in Tokyo, Rote Fabrik in Zurich, Zorba in Paris, Zoo/Usine in Geneva, Fri-Son in Fribourg, Café-Pompier in Bordeaux.

Syndrome WPW's first album, Marek Marek's Murder, has been released by Midinette Records in October 2008. It was mixed by Shapemod, producer from Berlin and also engineer for Peaches and Planningtorock. It contains 14 tracks of electronic analog Punk-Rock, full of aggressiveness, with a strong affinity for westerns and Heavy Metal.

Since the early spring of 2009, the members of Heroses have been struggling hard in expressing every tiny piece of feelings, thoughts and paradoxical daily life experiences with rhythms and sounds.

The diversity of our music backgrounds never hinders us in staying in the same line; in fact, it inspires us to explore a wide range of elements. By no means do we limit our steps to merely a few “labels”or “stereotypes”. Instead, we seek out the other side of this fascinating music world.

For the current line up, apart from our two permanent members (Ring and Lina), we also love to work with friends and other musicians who share the same music interest with us.

We embrace music as well as life. Heroses: Heroes and Roses.

Shelf-Index
http://www.shelf-index.com/
Electronic musician, DJ and video artist from Hong Kong who produces cutting edge electronica with broken beats and sampled materials. Had offered live performance in event such as Sound in the Park, Rebuilding Haiti, Sound Friction and LIFest. He is also member of the DJ crew Are Friends Electric?

DJ Hadal @ Strategic Sounds
http://www.facebook.com/stgsounds
In the twilight era of freedom decay, DJ Hadal strengthen his will to rebel by diving into the hadalpelagic zone of electrified beats and soak in the cold and pressurized sound wave.