Email ThisBlogThis!Share to TwitterShare to FacebookShare to Pinterest
Labels: interview 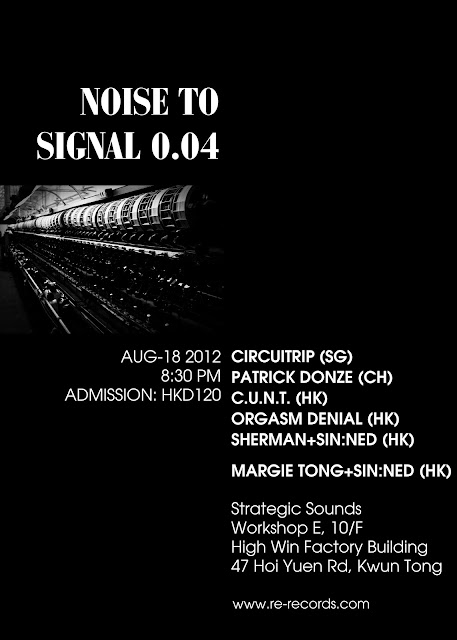 Admission: HK$120 (at door only)
For bookings and enquiries, please contact:
rerecordshk@gmail.com

CIRCUITRIP (Singapore)
http://soundcloud.com/circuitrip
CIRCUITRIP is an act that is best experienced live: extend the use of technology and virtual space-fusing familiar sounds, distorted and deconstructed sample, and restructures them into arresting soundscape that will definitely capture your attention... CIRCUITRIP believes that noise is social skill, a daily motion for soundtrack of our life that breaks the boundaries of any aura expectations.

Patrick Donzé (Switzerland)
As a child of electronic era, Patrick Donzé has brought together the computer-generated tools and instruments in an effort to transcend today’s digital power. “My sound feeds on machines in an improvised movement taking sense in a snap moment.”


Margie Tong (Hong Kong)
http://www.margietong.com/
Tong graduated from the School of Music of the Hong Kong Academy for Performing Arts. She was a recipient of The Standard Chartered Bank Scholarship (1994), The Hong Kong Jockey Club Music Fund (1994) and The Croucher Charitable Trust (1996) from England to continue her studies at the Royal College of Music in London. Tong performed Marimba Concerto as a soloist with the RCM Sinfonia in May 1995. During this time she won the Sullivan and Farrar Prize (1995) and the British Resume Prize (1995).

Rolf also curates the label Noisoke Records which brings more sounds into town, including the Orgasm Denial & Torturing Nurse - split 7" 'Real Noise: From Cannibalism To Karaoke' (2011) and some selected items from other countries, as well as an ongoing Power Electronics and Noise performance series "Cut My Throat" with label Assembly of Hatred 仇恨集結 including KK Null, Torturing Nurse, Hatred In Eyes, etc.

Being a veteran writer of the legendary Hong Kong alternative music magazine MCB (Music Colony Bi-Weekly), his writings had influenced a wide spectrum of experimental musicians and listeners. While not writing as a pseudo-music critic elaborating his esoteric worldview, in the same idiosyncratic fashion, he spends much of his time hacking and sculpting sonic materials with his laptop and various non-standard electronic gears. With his on-going experimentation embracing improvisation, noise, errors, chaos and randomness, he has been re-visioning an unorthodox sound-making process expressed in extreme dichotomies, and driven by intuition and direct experience.

He had offered performance and creative work for concert, sound installation, workshop, audio-visual and theatrical performance. He had taken part and performed in events such as HK Sound and Vision Festival (2003), Get It Louder (2007), Hong Kong & Shenzhen Biennale of Urbanism/Architecture (2007, 2009), Architecture is Art Festival (2009), Notch Festival Guangzhou Station (2009), MILK+ (2010), and Whisper Music Festival (2010).

ABOUT RE-RECORDS & NOISE TO SIGNAL SERIES

Re-Records is a record label initiated by experimental electro-acoustic duo No One Pulse from Hong Kong. With Re, we don’t solely aim to be an outlet for releasing self-initiated or other affiliated projects, but also for artists and releases we deem interesting.

Noise to Signal is a new performance series that focus on improvised experimental music within the context of performing art.